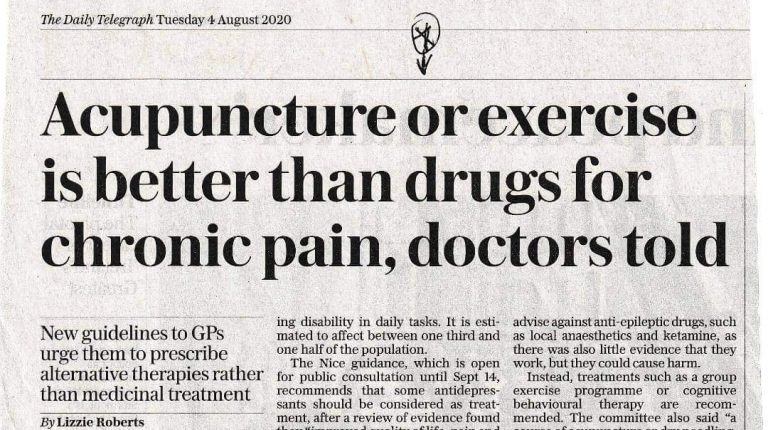 The National Institute for Health and Care Excellence (NICE) has just published a draft guideline for chronic pain. The guideline has had extensive media exposure, with the headline that painkillers should no longer be prescribed for longer-term pain. We’re delighted to see that acupuncture is one of only four treatments now recommended.

Around a third of the population may be affected by chronic pain; many of those also have a diagnosis of depression, and two-thirds are unable to go out to work because of it. Thus the implications of these recommendations are enormous for UK healthcare policy and allocation of resources. NICE point out that current treatments of any sort are helpful for no more than a minority of the population and the benefits are modest.

This is NICE’s first guideline for chronic pain in general, rather than a specific painful condition, though the equivalent Scottish guideline agency (SIGN) has had one for several years (and it, too, endorses acupuncture). It is important to caution that this is not yet a done deal, not until final publication in January 2021. It is now open for consultation, until 14 September, after which the committee will discuss the comments and consider whether to amend the guideline. Although it’s very unlikely that there will be major shocks, some details may be changed.

It is also important to realise that this guideline excludes any condition whose pain management is addressed by existing NICE guidance, that is headaches, low back pain, sciatica, osteoarthritis, rheumatoid arthritis, spondyloarthritis, endometriosis, and IBS.

This new guideline is for chronic primary pain, characterised by emotional distress and functional disability. Common conditions that would qualify are fibromyalgia, myofascial pain, chronic neck pain and chronic pelvic pain, though there are many more possibilities.

Which treatments are recommended by NICE in this guideline?

What’s the story behind this result?

There’s an acupuncturist on the committee, which must have boosted our prospects enormously. Usually this is not possible with NICE and has been a continuing bone of contention. Here, though, we had an excellent candidate (who is also a GP) coming together with a guideline that was going to be driven by the urgent need to cut down prescriptions of opioids and other painkillers, with a strong US drive to include acupuncture, allied to a solid body of evidence (thanks to Hugh MacPherson and the Acupuncture Trialists collaboration).

What sort of acupuncture, what dose, and delivered by whom?

For NICE’s purposes it can be acupuncture or dry needling, within a traditional Chinese or a western framework.
In order to try and keep a lid on the cost of rolling out new acupuncture services in the NHS, and to stay below the threshold indicated by their cost-effectiveness analysis, acupuncture should be:

What did the acupuncture evidence show?

NICE included 32 studies in their review. They were looking for randomised controlled trials comparing acupuncture either to sham or to usual medical care, hence the results come separately for these two categories. Also they separated data at up to three months from the longer-term follow-up data. Nine different outcomes were used, with more than one scale in some of these, so there are lots of different results, and I shall present only those from the largest number of trials.

For pain, acupuncture was superior to both sham and usual care, by 1.41 and 1.46 units respectively, on a 0-10 scale. NICE sets the bar for determining clinical importance at 1.0, so these both pass that test. (In the back pain guideline the sham comparison came in below 1, on which basis they rejected acupuncture.) To be able to get over the sham hurdle, which has bedevilled so much of acupuncture research and its interpretation, is particularly satisfying.

Those were the results for the shorter term. There is much less longer-term data, and none here for the usual care comparison. For sham, the acupuncture advantage was 0.81, which is pretty good but falls below the cut-off. Lack of long-term data is a general issue, not just with acupuncture.

For all other outcomes there are few studies for any one of them. It is notable that all of the measures for mental health, psychological distress and sleep, both for sham or usual care comparisons, showed benefits with acupuncture, underlining its ability to address symptoms and quality of life across a wide spectrum.

Two existing studies, and a further analysis by NICE, showed fairly conclusively that acupuncture was cost-effective within a NHS framework.

What did the committee say in its summing up?

They agreed that there was good enough evidence that acupuncture was beneficial for pain. They discussed the credibility of the sham comparison data but crucially were able to recognise that it could possibly underestimate the acupuncture effects as well as overestimate them; also that sham acupuncture could be therapeutic in its own right. These are subtle but quite profound differences to the way they’ve argued before in recent years.

They decided to make the lesser recommendation of ‘consider’, rather than ‘offer’, acupuncture. This was probably mainly due to concerns about the ‘high resource impact of implementing this in current practice’. They noted that acupuncture used to be widely available in the NHS but many of those services have been decommissioned now.